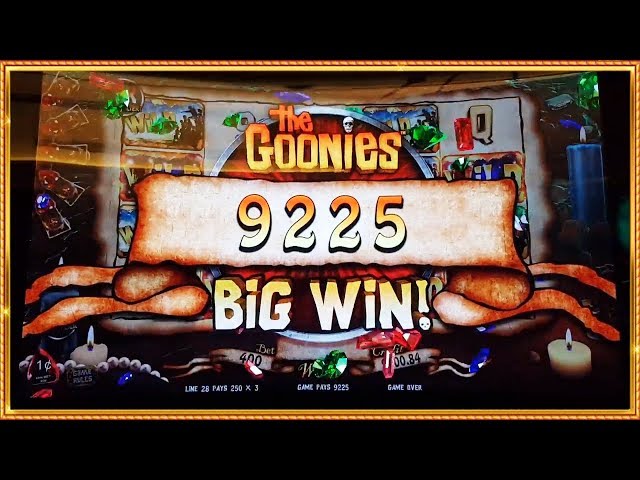 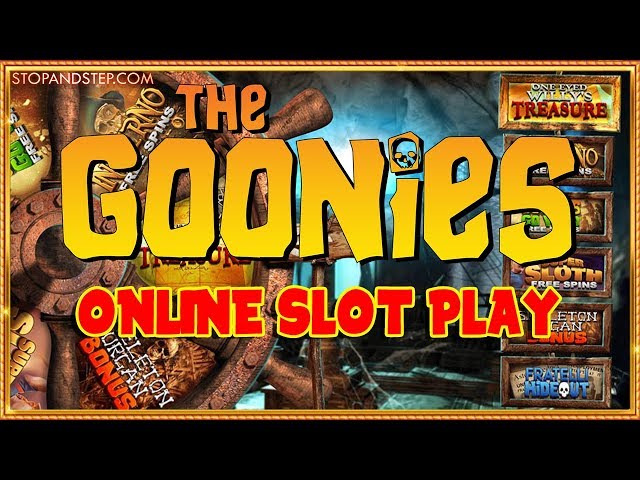 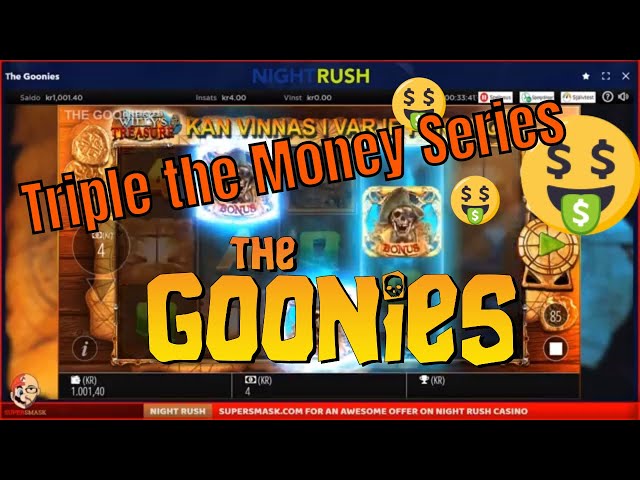 The Goonies is a slot machine developed by Blueprint Gaming and it's based on the movie with the same name from 1985. It's about a band of kids that wants to save their homes and then discover a treasure map. It's an adventurous movie and it got quite famous when released, which is a good reason for it to become a slot machine as well. There are definitely some big wins hidden behind the reels in this game and we are going to tell you all about it. We'll also post videos with some of the highest winnings the slot has paid out for you to know what's to be won while playing.

The theme is the movie with the same name, The Goonies, and the slot is therefore adventurous just like the movie. Both sounds and graphics have taken inspiration from the movie and it's a really interesting game to play. The graphics are great and it's really interesting and exciting to play! When it comes to the symbols there are low paying symbols in the shape of J, Q, K and A, which is usual in slot machines. The higher paying symbols consists of skeletons, chests filled with gold and the Jolly Roger flag pays the highest amount for a betline win. There's also a scatter and a wild symbol in the slot machine, which we'll tell you all about further down in this review.

Then what about the technicalities in the slot machine? Well it's made up by five reels and three rows of symbols, as many other slot machines you'll find online. The paylines are 20 in number and to win you need to match symbols starting from the leftmost reel. Most symbols needs you to get at least three matching symbols on a payline, but some of the symbols in The Goonies takes only two matching ones to give a payout. We've taken a look at the betting possibilities in the game as well and we must say that they're very generous. At the lowest you can bet just 10 cents per spin, perfect for those with a small bankroll. However if you want to bet big numbers you can bet as much as 200 dollars for just one spin! The chances of big wins are huge no matter which bet you play with. Then what of the winning possibilities in The Goonies? Well the Return to Player (RTP) lands on 96.00 % and the volatility is classified as mid-high, which means that big wins are just around the corner when playing. All you need is a little patience when playing.

There are bonus features in The Goonies as well. For starters you'll find a wild symbol that helps create winning combinations by substituting for other symbols. This will help you win easier and it also gives a high coin win on it's own. If you land three or more of the skull scatter you'll reach One Eyed Willy's Bonus. In the bonus game you'll spin a wheel to win one of six bonuses. Some of them gives you free spins and some gives you a coin win. Three of them gives free spins with different features and you'll definitely get some big wins when playing for free! You can get more than one bonus feature as well depending on how it goes for you in the first one.

But don't think that that's all, there are a random feature as well called One Eyed Willy's Riches, which will activate a modifier on your spin. You might get overlay wilds, wild reels, colossal reels, mystery symbols, additional bonus symbols or a guaranteed big winning spin. There are also two random modifiers that can turn a losing spin inte a winning spin. As you can see The Goonies has gotten a lot of bonuses to offer the players.

We like The Goonies and we believe the slot can be played by everyone. It's not a must for you to have watched the movie, it's still a very exiting slot with nice graphics and great features. And of course there are plenty of big wins that you can cash in when playing the game. We recommend for everyone to try it out, you'll most definitely have a great time while playing!

Where can i play The Goonies?

You can play the big win slot game The Goonies at our exclusive big win casino Weltbet. Weltbet also offers a ton of other big win slot machine and offers a very good casino experience overall!

The Goonies is a slot machine developed by Blueprint Gaming and it's based on the movie with the same name from 1985. It's about a band of kids that wants to save their homes and then discover a treasure map. It's an adventurous movie and it got quit...