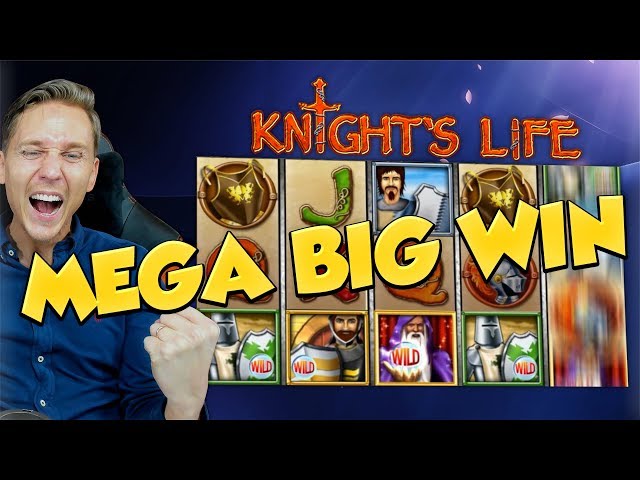 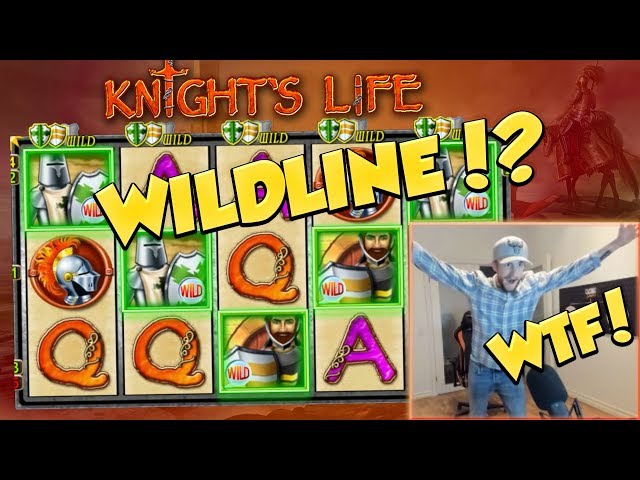 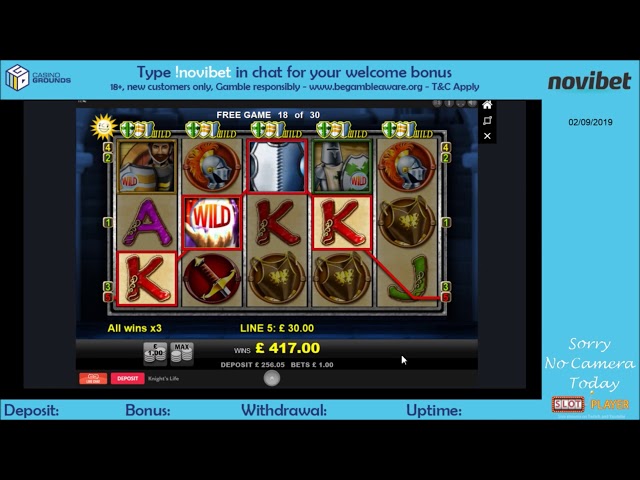 Knight's life is a slot machine created by Merkur. It's gotten a medieval theme and offers much more than what you might think at first glance. On our page you can see some videos of the highest wins ever given by this game, there are more than one big win to take a look at. Knight's life might look simple but there's actually alot of exciting features to experience while playing the game. We know that because we've tried it out to find out how it is to play it, and we promise we were not disappointed! Read on to find out everything there is to know about this game!

The theme of the game is medieval and of course knights as the name tells you. There are some different knights in the game, all with their shining armor. The background is like a castle and the graphics are pretty good. There's no background music, but when you put the wheels on spin there's some sound effects, as well as when you manage to land a win on the reels. There are animations as well to make the game experience even better. There are plenty of different symbols available on the reels. The lower paying symbols are card symbols J, Q, K and A. Medium paying symbols consists of knights equipment such as a sword and a helmet. The three knights are the high paying symbols of the game, and during free spins they'll also work as wild symbols. There's however a normal wild as well, a magician, and a scatter symbol that's a horse.

Knight's life has five reels and three rows of symbols and only five betlines, which is pretty low. The betlines are fixed which means that all of them are active at every spin. When it's time to choose your bet it's simply done, all you need to do is press the button with coins. The lowest possible bet in the game is as low as ten cents for a spin and the highest bet is as little as 10 dollars. This makes the game less suitable for those of you who's highrollers. However the low bet levels doesn't mean that you can't win big, there are plenty of big win possibilities in Knight's life. This slot machine has a RTP of 95.84 % as well as a high volatility. To put it simple this means that you might need to spin the reels for a long while before cashing in a win, but when you get a win it's more likely to be high. Highly volatile slots is the best option for players looking for big wins.

Then what about the bonus features? There are some innovative and unique features in this game which we'll tell you all about. There's the regular wild symbol which replaces other symbols to create winning combinations more easily., and doubles your wins Then there's the horse scatter which will award you with some free rounds. You'll either get 10, 15 or 30 free spins depending on if you land 3, 4 or 5 horse scatters. During the free games there are some great features available to make your possibilities of winning even higher! First of all the different knights will become wilds, starting with number one on reel one during the first spin, then adding with one reel until it's wild on all five reels. From spin six knight number two will be wild as well. After 15 free rounds all of the three knight symbols will be wild symbols on every reel, imagine the wins that can give you. But that's far from all! Knight's life still got much to offer the players. If you land two horse scatters during the free rounds one more free spin will be added to the ones you already have. Apart from that there are multipliers available as well, from spin 6 to 10 all wins will be doubled, then every spin from 11 and onwards will be multiplied with 3. If you want a super big win then that's where you're more likely to get it!

We really enjoyed Knight's life, it's very exciting. There are many wins to cash in while playing the game, you should wait no more and try the game out right away!

Where can i play Knight's Life?

Knight's life is a slot machine created by Merkur. It's gotten a medieval theme and offers much more than what you might think at first glance. On our page you can see some videos of the highest wins ever given by this game, there are more than one b...

Other slots from Merkur

Night of the Werewolf