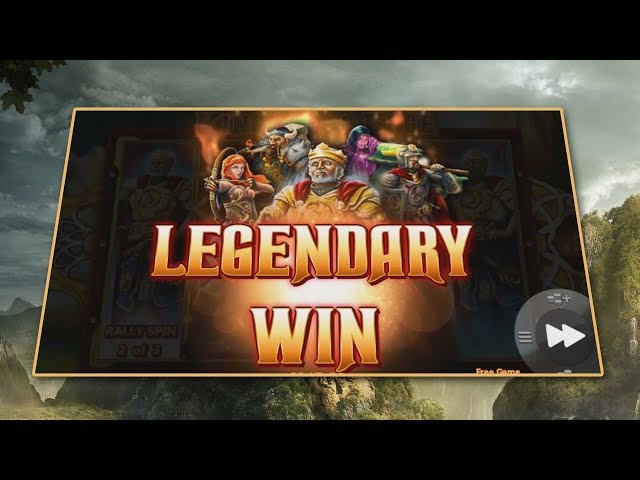 Kingdom's Edge is a slot developed by NextGen Gaming and it's definitely going to take you for a great ride. With it's fantasy-theme and knights in shining armor you'll enjoy watching the reels spin while playing this slot game. It's gotten two different kinds of wilds, a free spins feature and a unique Rally Spin feature as well, you'll never see a dull moment when playing Kingdom's Edge. For the game to be able to pay out big wins it's equipped with a very high volatility, that means that patient players are most welcome! Read ahead for our full review of Kingdom's Edge.

As we mentioned in the introduction this game's gotten a fantasy-theme, however it's got a touch of medieval times as well. The graphics are great, every symbol's amazingly made and the background shows high mountains and a forest. The background music is soft and exciting all at once and it suits the game perfectly, together with the sound effects and animations it's an experience of perfection and you'll enjoy every single spin.

NextGen has created a slot machine of standard built with five reels and three rows of symbols. There's 20 paylines going from left to right on the reels, and you need three or more matching symbols on a payline to win. To choose your bet level is simple, you just choose your total bet and start spinning the reels. The lowest bet possible is 10 cents and at the most you can bet 50 dollars in a single spin. This isn't a very high bet but it's high enough and it can give you some big wins as well. So what are the winning possibilities in Kingdom's Edge? We've found it out for you so that you'll be prepared before playing. For starters the game's gotten a Return to Player (RTP) that's 96.50 % and a very high volatility. That means that you can count on getting big wins if you're patient enough to wait for them. You can spin many times before getting a win, but when the wins come they're usually high, so prepare for some Super big wins while playing Kingdom's Edge.

When it comes to bonus features there are some of them waiting for you as well while playing Kingdom's Edge and they'll help you get to those big wins even easier. For starters there's two different wild symbols, a gold wild and a silver wild. The gold wild can only appear on reel 1 and it's stacked, meanwhile the silver wild can appear on reel 2, 3, 4 and 5. Both of the wild symbols substitute for all symbols except for the scatter symbol and the other kind of wild symbol. The Gold wild also has it's own feature that it can activate; Rally the Troops feature. It's activated when the stacked gold wild appears on all positions on reel 1. The stacked wild will stay in place and the other reels will spin and depending on which other symbols shows up different things can happen. If silver wilds land on the reels during the Rally the Troops feature they'll expand and cover the whole reel, and any hero symbol that shows on the same reel as a silver wild will add 1 to a multiplier for the spin and any shield scatter that lands on the same reel as a silver wild adds one more rally spin to the feature. You can get up to 5x multiplier during the feature. Imagine all the epic wins you can cash in during this feature!

The other bonus feature of the slot is Defend the Gates free games feature that'll be activated by landing three or more scatters on the reels. You'll get either 15, 20 or 25 scatters depending on how many shield scatters you land. Rally the Troops feature can be activated during your free spins and if the gold wild appears on reel 1 but not entirely it'll nudge to cover the whole reel. However if the gold wild lands stacked on all rows on reel 1 without nudging you'll be awarded five or ten more free games. You can re-trigger the free games during the feature, so imagine the amount of free spins you can get. Kingdom's Edge has the potential to pay out some really big wins to the players, try it out right away!

Where can i play Kingdom's Edge?

Kingdom's Edge is a slot developed by NextGen Gaming and it's definitely going to take you for a great ride. With it's fantasy-theme and knights in shining armor you'll enjoy watching the reels spin while playing this slot game. It's gotten two diffe...

Other slots from Nextgen Gaming

Rise of the Mountain King