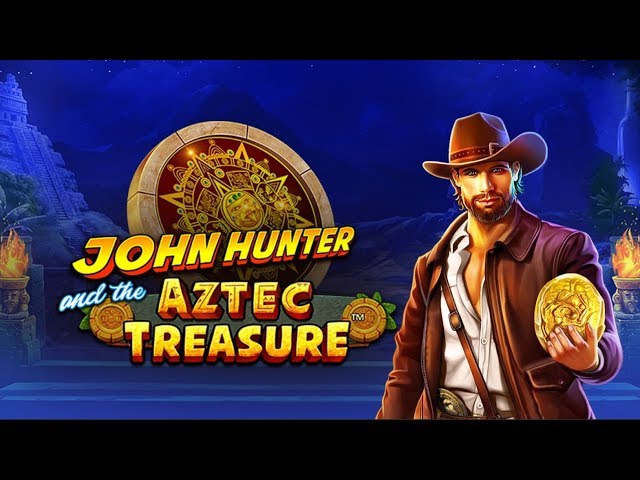 John Hunter and the Aztec Treasure is a slot machine developed by Pragmatic Play and it's taking you on an adventure with John Hunter while he's looking for the aztec treasure. Spin the reels in this slot game with up to six rows and up to 7 776 ways to win! You'll encounter wild animals on the reels as you spin them, and the highest paying symbol is John Hunter himself. With wilds and free spins the slot is more than ready to give you big wins while playing. We've tested it for you, read on to find out all about this awesome slot machine.

The theme is the south american jungle and the aztecs, you're tagging along with an adventurer who's looking for the aztec treasures. The background music fits in the theme and makes the slot feel more exciting, the sound effects and animations are great as well. All symbols are created with great detail and consists of John Hunter, a black panther, a snake, a bird, a hat and a torch and card value symbols from J to A. John Hunter is the highest paying symbol in the game so look out for him for those big wins.

John Hunter and the Aztec Treasure has five reels with up to six symbols on each reel. This results in up to 7 776 ways to win, which is alot. To win you need to match at least three matching symbols on adjacent reels, starting on the one furthest to the left. You can get between 3 and 6 symbols on each reel. Then what about the bet levels in the game? If you press the + button next to the spin button you'll be able to choose bet level, coin value or total bet and there's a wide range between highest and lowest bet in the game. The lowest amount that you can bet in one spin is 0.20 dollars and at the most you can bet 100 dollars in a single spin. This means that the game suits every player no matter the size of their bankroll. When it comes to the Return to Player of the slot machine it's 96.50 %, which is a high and favorable RTP. The volatility of the game is high so as long as you're patient when you play you can cash in some Super big wins when you least expect it.

Of course there are some bonus features in John Hunter and the Aztec Treasure as well and we'll give you every detail about them right now. For starters there's a substituting wild symbol which can show up on reel 2, 3 and 4 to help create winning combinations for you. Then there's the free spin feature which you'll activate by landing 3 to 5 free spin symbols on the reels, the symbol can show up anywhere on the reels. You'll be awarded a random number of free spins based on how many scatters you land when activating the feature. 3 scatters gives between 5 and 25 free games, 4 of it gives 10 to 25 free spins and if you manage to land five scatters you'll be awarded with either 15, 20 or 25 free spins. In John Hunter and the Aztec Treasure every free spin comes with a multiplier, it can be either 2x, 3x, 5x, 7x or 10x. You can also get more free spins during the feature, by landing two or more scatters on the reels. You can be awarded up to 15 extra free games if you're this lucky! All those free spins gives you plenty of opportunities to get big wins without spending a single cent of your own money.

John Hunter and the Aztec Treasure is a really awesome slot machine and Pragmatic Play can be proud of their creation. It's exciting both to the eyes and ears, but also because of the possibilities of winning big. You can win up to 9 000x your bet, imagine how many dollars you can get by playing this game. You can bet both low and high amounts and that's why we like the game a bit extra, it's available for both highrollers and players who want to play it safe. If you're patient you might be lucky enough to be the next big winner in this game. Tag along with John Hunter to South America and try to get to the aztec treasure first.

Where can i play John Hunter and the Aztec Treasure?

You can play the big win slot game John Hunter and the Aztec Treasure at our exclusive big win casino Bettilt. Bettilt also offers a ton of other big win slot machine and offers a very good casino experience overall!

John Hunter and the Aztec Treasure

John Hunter and the Aztec Treasure is a slot machine developed by Pragmatic Play and it's taking you on an adventure with John Hunter while he's looking for the aztec treasure. Spin the reels in this slot game with up to six rows and up to 7 776 ways...