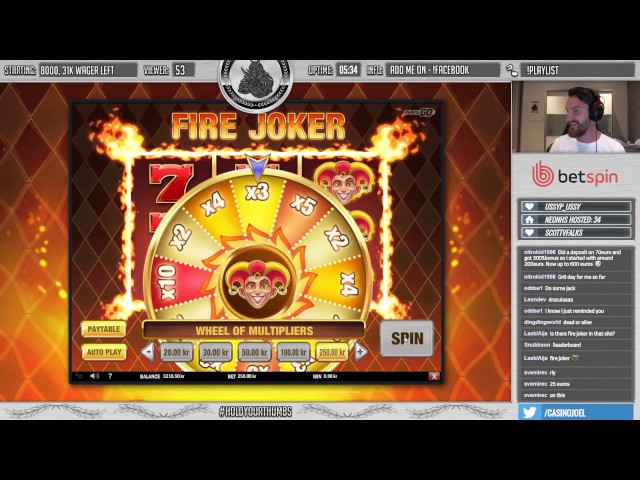 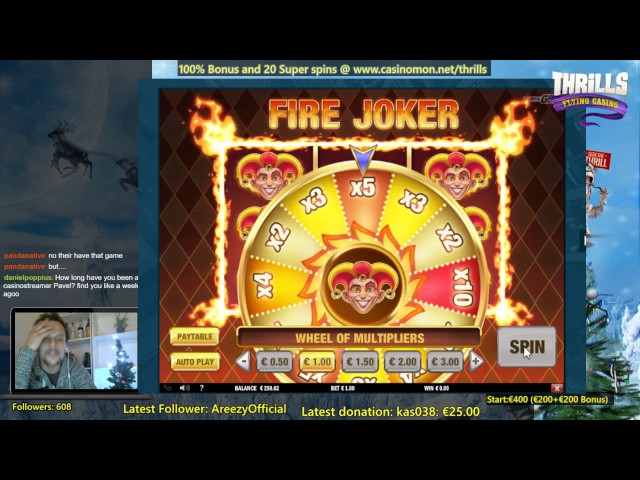 Fire Joker is a slot game created by the swedish game developer Play'n Go and it can deliver some big wins to thosewho are lucky. It's a game of fire and flames, and of course there's a joker in the game as well. We've taken thegame for a ride and are ready to tell you everything you need to know about it.

Fire Joker isn't a very advanced slot game but rather reminds us of the classical slot games you can play onlandbased casinos, however it doesn't mean it isn't good. The graphics are bright and clear and the sound effectsmatch perfectly with the game. Every symbol is made with perfect details and the theme is clear, it's acasino-themes slot. You'll find symbols from old-time slots, like for example lemons, cherrys and a BAR symbol.

Fire Joker is built like an old-time slot machine as well, with it's three reels and three rows of symbols. Thepaylines are only five, and you need matching symbols from the reel furthest to the left for a win to occur, maybeeven a big win. The paylines are fixed so you can't choose how many to play with, if you want to play it's with allfive paylines active. Fire Joker has gotten a good RTP at 96% and a volatility that is classified as medium, thereare sure room for some big wins when playing this slot from Play'n Go. When it comes to available bets the lowestpossible bet is 0,05 dollars and the highest possible bet is 1 000 dollars.

Even if Fire Joker looks like an old-time slot machine that doesn't mean that there aren't any cool features foryou to enjoy, there are actually a few. For starters there is the joker symbol, which substitutes for all othersymbols to create a winning payline. The joker is definitely a symbol to long for when playing this slot game. Thereis another feature called respin of fire which will be activated if two of the reels are filled with the samestacked symbol. During the respin of fire those two reels will be held in place while the third reel gets to spinone more time to try to create a winning payline. This is a feature that can give you really big wins if you'relucky, however there is one more exciting feature to long for when playing Fire Joker.

The last bonus feature is the Wheel of Multipliers, how exciting does that sound? To get a spin on the wheel youneed to fill all of the three reels with the same symbol. The wheel is filled with different multipliers, the luckyones will get the highest one! The multiplier can either be x2, x3, x4, x5 or x10 at the most, which will definitelygive some big wins to you as a player. Fire Joker is an amazing slot despite the fact that it looks like a classicalslot machine, it's actually everything but boring. The best of all is that you can win up to 800 times you bet ifyou're really lucky, that's 800 000 dollars at the most and isn't that a pretty big win?

Fire Joker is a slot machine from Play'n Go which makes your thoughts wander back to old-time slot machines,however you shouldn't be fooled by its appearance. This slot machine offers nice bonus features such as respins, ajoker-symbol and an amazing Wheel of Multipliers that gives you a great chance to win big. You will see all kinds ofclassical casino symbols when playing the game, such as lemons, cherrys and other fruits. The highest paying symbolis 7, except for the joker which is the highest paying symbol if it's on it's own on a winning payline. Fire Jokeroffers both low and high bets and is therefore suitful for all kinds of slot players, no matter the size of yourbankroll. It's definitely a fun and entertaining game to spend time playing and hoping for that big win that canturn your life around. With it's high RTP and medium volatility there are big possibilities for you to cash in somenice prizes.

Where can i play Fire Joker?

Fire Joker is a slot game created by the swedish game developer Play'n GO and it can deliver some big wins to thosewho are lucky. It's a game of fire and flames, and of course there's a joker in the game as well. We've taken thegame for a ride and ar...

Eye of the Kraken