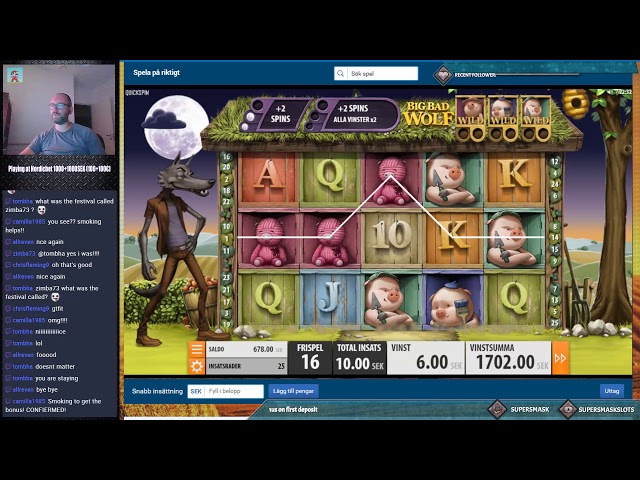 I guess you have all heard the story about the big bad wolf and the three little piggies? If you like the story you will love this slot machine! Quickspin have done a great job while creating this game and even the features are tied to the theme. The game was released in 2013 and is still very popular among the players. The graphics are great and the features intriguing. We took Big Bad Wolf Slot for some spins to try it and out in order for us to be able to tell you all about it. We have also taken a look at the possibilities of cashing in a big win! Come along to find out everything!

So the theme of the slot machine is the story of the big bad wolf and his attempts to blow down the pigs houses. The reels takes place in one of the houses and when you spin the reels it is actually wooden boxes that comes falling down, with the symbols on them. If you land a win the boxes will be blown away and replaced with new ones. Inside the house you can see one of the little piggies standing by the fireplace. There is no background music in the base game, only sounds when you press play. The animations and sound effects are awesome as well. In the background you will see beautiful green fields and some trees as well. The symbols of the game are wooden boxes with card value symbols as low paying ones. The ones which pays out more is the three little piggies as well as a plush toy. A beehive takes the position as wild symbol in the game. The wolf himself is the scatter symbol and during free spins there is also a moon symbol available on the reels.

Then on to the technicalities of Big Bad Wolf Slot. Well there is five reels and three rows, which is a common setup for videoslots. The paylines are 25 and reaches from left to right. It's not spinning reels but boxes which falls down from above when you spin the reels. When it comes to the betting possibilities you can press the buttons to the right of 'total bet' and if you choose the lowest bet level you will play with 25 cents a spin. If you wish to bet more there is also the possibility to raise your bet to 100 dollars a spin. Quickspin has equipped this game with a high Return to Player (RTP) at 97.34 %, which means great wins lies ahead. The volatility is high, which means that you can win really big wins while playing this game.

Last, but not least, we are going to tell you about the different bonus features in Big Bad Wolf. For starters there is the Wild Symbol, the beehive. It will replace other symbols to create a winning line, as well as give you a cash prize if you land two or more of it. There is also a feature called Pigs Turn Wild, which is tied to the winning rounds. Up in the right corner of the grid you will see the three pig symbols with circles beneath them. Every second consecutive win will turn a pig wild. So if you land six wins in a row all three piggies will be wild symbols! The wins need to be made on the same spin, as the winning symbols will be blown away and replaced with new ones that can create a new win.

Next bonus feature is the free spins, which will be activated by landing three or more scatter symbols. You will be awarded 10 free spins and you can get an additional 10 free spins if landing three or more scatters during your free spins. When playing the free spins there is also another feature called Blowing Down The House Feature. This will be activated by landing moon symbols on the last reel. Three moon symbols blows down the wood house and gives two extra spins. Six moon symbols will help the wolf blow down the brick house, as well as reward you with 2 additional free spins and a multiplier x2 on every following win. Big Bad Wolf is funny and exciting and you can get really big wins while spinning the reels!

Where can i play Big Bad Wolf?

I guess you have all heard the story about the big bad wolf and the three little piggies? If you like the story you will love this slot machine! Quickspin have done a great job while creating this game and even the features are tied to the theme. The...

Other slots from Quickspin

Ticket to the Stars

Hall of the Mountain King